Day One of Royal Ascot sets the scene for a great week, starting off with three cracking Group 1 contests and a G2 for the 2yos (which would be a G1 anywhere outside Europe). For the detailed preview, I've gone with the St James's Palace Stakes which is a fascinating contest. With the English, French and Irish Guineas all held in quick succession, this brings the form all together, with a few other impressive formlines thrown in to muddy the waters. This is traditionally a favourites race, there have been no winners over 10/1 for two decades and 12 of those winners have been at 11/4 or shorter. 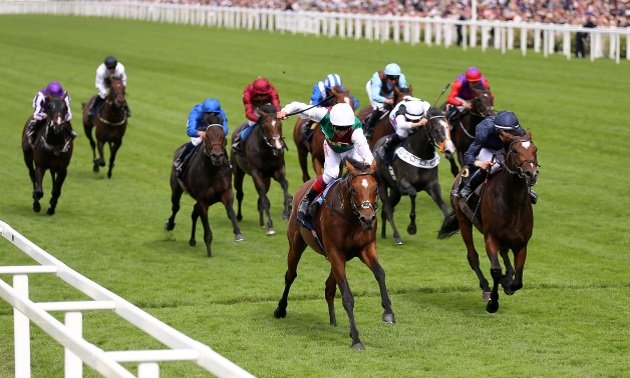 Without Parole winning for John Gosden in 2018.

1. Battleground (2) - flopped in the 2000 Guineas after being truckloaded late, 8/1 into 9/2 which takes a bit of doing in a Classic. Apparently he didn't handle the undulations of the Rowley Mile. Looks the stable top pick on jockey bookings. Won the Chesham here last year, followed it up with a win in the Vintage Stakes at Glorious Goodwood, then second in the BC Juvenile Turf. Tongue tie added for the first time, big shout if back to his best. Inside gates don't have a great record in this, only two winners from last 13 runnings have begun from 1 or 2.

2. Bullace (13) - beaten 0.5x0.5L by Mostahdaf and Highland Avenue in the Heron Stakes at Sandown, only losing second in the closing stages. Previously had racked up three wins on the trot and is still improving. EW chance in a tough race, not helped by drawing the outside fence.

3. Chindit (8) - four wins from six starts, with the two unplaced runs being in G1s - the Dewhurst and 2000 Guineas. Got too far back in the latter and worked home well, plenty of reasons to expect him to be in the mix here.

4. Highland Avenue (12) - also won three in a row, including the Listed Feilden Stakes, before running second in the Heron at Sandown. Dual all-weather winner which used to be a profitable trend here. Looks the Godolphin top pick on jockey bookings.

5. La Barrosa (5) - boom colt last season winning his first two races, but since then it has been fifth in the heavy in a French G1, second in the Craven behind stablemate Master of the Seas (2nd in 2000 Guineas), then sixth in the wet in the Irish 2000 Guineas. Seems at his best on firmer going, the mile suits, decent EW chance.

6. Lucky Vega (11) - Yulong-owned colt destined for the breeding barn in Australia after this and they'll naturally be very keen to land him another G1. Third in the 2000 Guineas at Newmarket, fourth in the Irish equivalent in the wet, he's right in the mix here although the wide gate on the round track isn't a plus.

7. Maximal (9) - just one win from six but has always raced in strong company. Seconds behind El Drama and Hurricane Lane show talent but this is a rich Group 1. Drops back from 1m2f to the mile, will be running on.

8. Mostahdaf (1) - undefeated Frankel colt who hasn't raced beyond Listed class as yet. Jim Crowley/Shadwell/Gosden all have great records at Royal Ascot, this is tough. Wasn't fully tested winning the Heron, and note that was the race Without Parole came through in 2018 (though he was a boom horse already after winning his first two races by six lengths). Seems poor value at the price with gate one not an advantage.

9. Naamoos (10) - bolted up in the Esher Cup but the 6L winning margin was mostly due to Rifleman unseating the rider a furlong out. Handy but still has a bit to find.

10. Ontario (3) - likely pacemaker, hasn't trained on as a 3yo. Stable third pick on jockeys. Blinkers applied for the first time.

11. Poetic Flare (7) - back for his fourth run in 45 days which mightn't seem odd for Aus punters but is rare in this part of the world. Won the 2000 Guineas at Newmarket,  ran sixth in the soft in the French version, then was beaten a head by stablemate Mac Swiney in the Irish equivalent. Must go close, the form's on the board, trust the trainer re his ability to cope with frequent racing at the top level.

12. Thunder Moon (6) - heavily tipped to win the 2000 Guineas after a tremendous 2yo campaign but flopped with no obvious excuses found (correction - was 'extremely coltish' in the parade ring). He beat many of these year winning the G1 National Stakes at the Curragh, followed by a third behind St Mark's Basilica in the Dewhurst. Frankie climbs aboard, must have a decent chance if in a forgiving mood. At current price of 10/1, he's worth a look.

13. Wembley (4) - the pick of the Ballydoyle colts going into the Guineas, but flopped at Newmarket and the Curragh, beating home just three horses across both races. Once bitten, twice shy, would need to be at least double the current price to be considered. Tongue tie added for the first time.

I think the Irish colts might be better, even avoiding those of Aidan O'Brien stallion production line. Notably there is one trend I am ignoring here at my peril. 16 of the last 19 winners have had either two or three runs this season - Poetic Flare has had four, while Thunder Moon has just the one.

Lucky Vega
Thunder Moon
Chindit best of the British, with Bullace worth a look EW with four or five places.