The best Flat race in Europe if not the world, but this year it seems a bit like a race in Dubai, all for the internationals rather than the locals, with the best of the locals currently priced at 25/1. Hopefully that's just a blip for the French industry, they've won the last couple after all. You do have to wonder about the French though, they're making a big deal of that @racingblogger bloke... 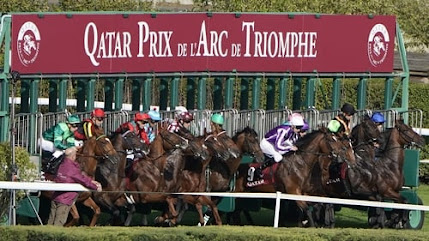 1. Torquator Tasso (12) - Has campaigned all his career in Germany before this, so it's tricky to get a line on just how good he is. One would think if they've waited this long to have a crack at international riches, then he's just a reserve-grade champion rather than a big time Charlie. Won the G1 Grosser Preis von Baden in September, beating Godolphin's Passion And Glory by nearly 5L. P&G would get lapped by the Godolphin contingent here, even before the weight allowance for 3yos. Also beaten 3L by Alpinista in the Grosser Preis von Berlin, the Prescott-trained filly who is artifically inflating her pedigree page by pinching cheap German G1s. Not today although he won't have any issue with heavy rain.

2. Deep Bond (5) - triple G2-winning Japanese colt who captured the Prix Foy at his European debut three weeks ago. A smart front-running ride by Cristian Demuro won that day but the problem is, only the runner-up from that race lines up here (Broome) and he'll be the pacemaker for Coolmore. Obviously has talent but the very best Japanese horses have yet to crack this, I don't see how a horse who couldn't run a place behind Japanese Triple Crown winner Contrail (same ownership) last season can suddenly be good enough to win the biggest race in Europe.

3. Broome (7) - Coolmore scrapper who will almost certainly be used as a pacemaker. Handy on his day, got away with an easy lead to claim the G1 Grand Prix de Saint-Cloud in July but that was a very weak G1 for France. Beaten the best part of 10L in the King George by Adayar but a wet track here gives him some chance of running a place at a big price.

4. Tarnawa (3) - superb Irish mare who won a trio of Group 1s (Prix Vermeille, Prix L'Opera, Breeders' Cup Turf) late last year and has done nothing to tarnish that form since. Bolted up in the G3 Ballyroan then finished a close second to the stud-bound St Mark's Basilica in the Irish Champion Stakes, when the colt continually drifted across the track, making it very difficult to get by. Handles any going, she's the best of the older European brigade.

5. Love (4) - top class filly who started the year as favourite after an undefeated 3yo campaign but hasn't quite matched that level this season. She won the Prince of Wales at Royal Ascot first-up, but since then has been beaten by Adayar (G1), Mishriff (G1) and Petite Coco (G2, beaten a nose, conceding 9lbs). If she was tuned to the day for this race, then those results wouldn't worry me too much. What does concern me is the weather. She wants it bone dry and it won't be that at Longchamp on Sunday.

6. Raabihah (6) - fifth last year behind Sottsass, but hasn't kicked on this season, running a trio of seconds in Pattern races before a comfortable win in a FandM G2 last time at Deauville when stepped back up to the mile and a quarter. Perhaps the distance makes a difference to her but she lacks that class element to see her in the mix for the big prize here.

7. Chrono Genesis (14) - Japanese star who was only beaten a neck in the Dubai Sheema Classic in March by Mishriff, when we still had doubts just how good that colt was.

She then resumed three months later, cruising to victory in the Takarazuka Kinen for the second year in a row.

Since the start of her 4yo season, she ran a narrow second in the G1 Osaka Hai, won the Takarazuka Kinen, 3/4L third to Almond Eye in the Tenno Sho Autumn, won the Arima Kinen, second to Mishriff in Dubai, and then this year's Takarazuka Kinen. This is a very, very good mare with a big chance here. Unknown in the wet like most Japanese horses, she is by 2004 Arc winner Bago who had no trouble in it. The draw might be tricky but she doesn't mind sitting wide with cover and winding up from the half-mile. Oisin Murphy is a big plus.

8. Mojo Star (1) - ran second in the (English) Derby at 50/1 and only has a maiden victory at 1/6 in the win column, despite career earnings of £431k. Has form behind Adayar and Hurricane Lane, can't see him overturning that ranking but from gate 1, Rossa Ryan will be looking to push up behind the pace for a cosy sit and cheap rails run. Perhaps a place.

10. Adayar (11) - Derby and King George VI Stakes winner likely to start favourite here. Despite starting 16/1 in the Derby, he won convincingly and then reinforced the form in the KG, a huge step forward from his pre-Derby form. Don't think any of his defeats could be blamed on wet tracks, just immaturity at the time.

Godolphin have a very strong hand here with two Frankel colts and William Buick took his time to choose this one - reckon that might have been a coin toss.

11. Hurricane Lane (2) - the royal blue's highly-credible 'second' string, with a record of six wins from seven starts, his only blemish coming in the Derby at that goat track called Epsom when he lost both fore shoes, probably not ideal when navigating a track with reverse camber. Since then, he's racked up three Group 1s - the Irish Derby, the Grand Prix de Paris and the St Leger.

12. Sealiway (10) - local 3yo who'd love to see the rain continue all weekend. Won the G1 Jean-Luc Lagardere on a heavy track this day last year, by 8L over Coventry Stakes winner Nando Parrado and most recently, second to St Mark's Basilica in the Prix du Jockey Club in June (50/1). Hasn't run since which must be some concern. Only if the rain rules out half the field.

13. Alenquer (8) - German-bred 3yo for William Haggas who has a (pre-Derby) win over Adayar to his credit. After a setback saw him miss the Dante and the Derby, he then won the King Edward VII at Royal Ascot on the heavy, but has been at least six lengths behind Hurricane Lane (GP de Paris) and Mishriff (Juddmonte International) at his last two starts. Has never missed an each-way payout, very honest but this is a considerable step up on what he's faced so far.

14. Bubble Gift (6) - local hope who wasn't ready for the Derby but did finish sixth in the GP de Paris, just over 9L behind Hurricane Lane. Has since won the G2 Prix Niel when the odds-on fav flopped. 100/1 for a reason.

15. Snowfall (9) - if a Japanese runner can't win it, can a Japanese sire? This daughter of Deep Impact was a handy 2yo, nothing special, then has completely turned it around at three. She won the Musidora at 14/1 with a daring front-running ride, ah well, good ride, nothing special... Then the Oaks!

She won by a ridiculous 16L going away on a wet track, followed by the Irish and Yorkshire equivalents, never being tested in any of them. More recently she was beaten by Teona in the Prix Vermeille at 1/5, a little concerning but it's mighty difficult to keep a superstar horse at their peak for six months. The stable would have to ease up on her at some stage, to keep her from going over the top before the big day - this one. Hasn't raced against colts before but that shouldn't be a factor. Stable vibes are critical here, watch for market support.

And now the tricky bit. This is a very good race, I have little between the top four (Tarnawa, Adayar, Hurricane Lane and Snowfall), making it hard to have any confidence backing at those prices. Chrono Genesis deserves to be close to that quartet but the draw is a concern - anything around 9/1 is enough to compensate, while the roughie EW hope is Broome. He is certainly not a world-beater but he might just get away with a soft lead here. On-pace runners regularly go well here and running third at 66/1 is a realistic prospect, or slightly shorter if you can nab an extra place somewhere.