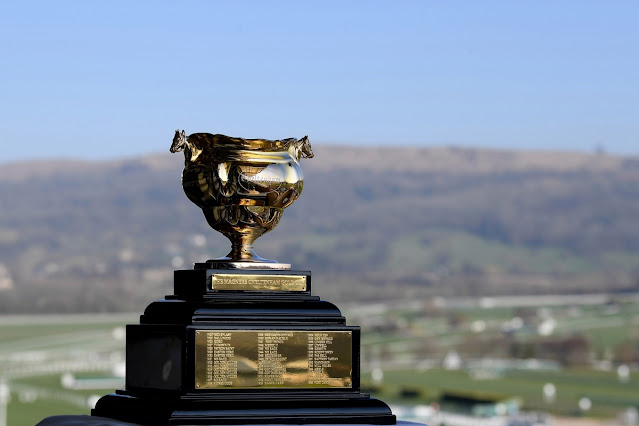 1. Al Boum Photo - lost his crown when running on late for third here last year, and only Kauto Star has ever won the Cup, lost it and then come back and won it again. Since that day 12 months ago, he was runner-up in Punchestown's version of the Gold Cup and won his traditional New Year's Day season opener at Tramore, albeit with a lower RPR than in the previous three years. Four 10yos won between 1988 and 1998, but none since.

2. A Plus Tard - sets a high standard, winning or a close-up second in his last four races, all top Grade 1s. Won the Savills Chase 2020, beaten 1.25L in the Gold Cup last year, destroyed the field to win the Betfair Chase in November by 22L (usually builds fitness through the season, this time he was set for the race), and most recently being touched off on the line by Galvin in the Savills of Dec 21. They say Gold Cup winners rarely suffer defeat in this race first, that's a bit harsh when he was only just beaten last season. Henry de Bromhead hasn't been in great form this week. Honeysuckle was just the superstar she is but Bob Olinger was dead lucky and quite a few of his other runners have been well below their best. Enough to sew a tiny seed of doubt.

3. Asterion Forlonge - rarely jumps straight, has fallen or dropped the rider in four out of ten chases including twice this season, including at the last fenc in the King George when making a challenge. Disappointing in the Irish Gold Cup, beaten 12.5L. His price is approaching where it compensates adequately for the inherent risk.

5. Chantry House - enigmatic gelding who earned favouritism in the King George with a string of small field wins but never got into the race at Kempton and eventually pulled up. Has never started at a price like today and on that alone, is worth a small bet, but this is a tough horse's race, hard to imagine him leaving it all out there slugging it out in a tight drive up the hill.

6. Galvin - seven wins and three seconds from his last ten chase starts, patiently building his way up through handicaps, G3s and a G2 before a narrow defeat in the G1 Down Royal Champion Chase to Frodon in October and a win by a nose, simply refusing to lose, over A Plus Tard in the G1 Savills Chase at Leopardstown over Christmas. His RPRs have steadily improved in his last seven starts so have we even seen the best of him yet?

7. Minella Indo - reigning champ who is yet to add to his win column since, with defeats behind Frodon (3rd, beaten 5L) in October, Tornado Flyer (pulled up, King George) on Boxing Day and Conflated (6.5L, Irish Gold Cup) last month. Yet his Festival record is brilliant, winning the Albert Bartlett in 2019, being pipped near the line in the RSA of 2020 when Champ came from the clouds, and winning the Cup last year. On each occasion, he stepped up a minimum of 16lb from his previous run based on RPRs. So perhaps all that really does matter is his exceptional Cheltenham form. See stable form concern from A Plus Tard.

8. Protektorat - the big local hope. Since wind surgery a year ago, he has been in great form, winning the Manifesto G1 at Aintree, running second conceding weight to most of the field in the Paddy Power Gold Cup here in November, then routing the field by 25L in the Many Clouds G2 Chase at Aintree in early December. While the form behind that win mightn't stack up (Native River had one more run and was retired), the RPR of 172 was a high one, significantly better than his previous best. He's the new horse on the scene, without the scars of running in this race before and losing. One slight concern is his record is much better in the first half oa season than the latter - apart from the Manifesto win straight after wind surgery last season. Youngest horse in the field, still improving, gives this a real shake.

9. Royale Pagaille - beaten 49L last year but has since rebounded to something like his best, winning the Peter Marsh Chase again at Haydock and running second in the Betfair and Denman Chases. Don't think that level is quite good enough. Maybe place money if they string out.

10. Santini - second behind Al Boum Photo in 2020, pulled up behind Minella Indo last year. Left the Henderson yard for a small trainer with a 4% win strike rate who gets to enjoy a Gold Cup runner. Needs to wind the clock back two years. Most of the world wish we could wind it back at least that far. Ain't gonna happen.

11. Tornado Flyer - surprise winner of the King George on Boxing Day when the two favs pulled up and the fourth fav fell. Can't trust that form at all. Hadn't won for two years before that, beaten by the likes of Allaho, A Plus Tard, Chacun Pour Soi, Min and Samcro. Shouldn't be good enough to win this.

An excellent rendition of the feature race of the week. Last year's trifecta take on some new challengers without a clear picture of the best horse in the race. The old stagers might just get it right on the day but I'd rather side with those showing their best form lately. Protektorat brings in a different formline via the Many Clouds and if he runs like that again, his rivals have it all to do. Galvin is still improving and showed remarkable resilience to overcome A Plus Tard last time, and take your pick between the de Bromhead pair.