It's Super Saturday at Flemington featuring the G1 Newmarket Handicap and Australian Cup, plus a swathe of G2, G3 and Listed support races. As always, the G1 handicap has drawn a strong field with the cream at the top and some handily-weighted opponents primed to take them on. 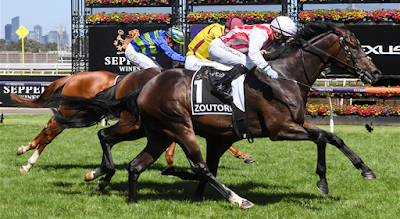 1. Masked Crusader - run-on sprinter with outstanding record over 1200m, five wins and two seconds from seven starts, including a neck second in the Everest three runs back. Didn't do a lot in the G1 Lightning first-up but the 1000m might have been a touch short for him. Faster pace of a big field handicap likely to suit better.

2. Home Affairs - 3yo colt who has won the Coolmore and Lightning, both G1s, down the straight at his last two starts, and seeks to add another big trophy to the pool room. 56kg is plenty for a 3yo in a strong field, very few carry that weight and win. Had 3kg advantage on Nature Strip last time, possibly the best sprinter in the world, but under these conditions, only one of his 16 rivals will be carrying more than him. The C.Waller - J.McDonald combination is simply lethal in big races. Barrier 16 won't phase him, he'll be right on the speed from the jump.

3. Lost And Running - Sydney sprinter with an impressive record of eight wins from 13 starts. Ran fourth in the Everest, beaten two lengths back in October, and has since won the Hunter ($1m, 1300m) and the Southern Cross (G3, 1200m, carried 61kg) with relative ease, perching just behind the pace and pouncing near home. Up in class here from those victories but that Everest run shows he's right in the mix. First time down the straight but seemed very comfortable in a jumpout here a week ago. Synthetic hoof filler first time is always a little query but the money has come for him all week. Lightly raced, still has an upside.

4. Zoutori - last year's winner at 20/1 carrying 57kg. Safe to say that wasn't a vintage field, this edition is considerably stronger. Not going as well this campaign, second last in the Oakleigh Plate when never put into the race. Winner of three from eight second up and four from 11 over course and distance. Will be a big price again.

5. Count De Rupee - Northern raider who focused on V'Landys' new pop-up races last spring and picked up some big cheques. A luckless third in the Silver Eagle, was nabbed on the line by I'm Thunderstruck in the Golden Eagle and then won The Gong comfortably over the metric mile. The hype might be on the top three from NSW but this one is a real chance at odds, getting at least a couple of kilos off each of them. It's long been said that you need a miler here when the pace is on. That sums him up perfectly but only one horse has ever won this race first-up - Redkirk Warrior in 2017.

6. Levante - Kiwi mare who has cleaned up in the big summer sprints there - second in the Railway, won the Telegraph, won the BCD Group Sprint, all Group 1s. There's usually a bit of a gap between the best Aussie and Kiwi sprinters but she's fit and flying.

7. Halvorsen - wins G3 and Listed races here but this is a huge step up. Three or four kilos isn't enough to bridge that gap. Beaten a long way in this last year at 100/1.

8. Oxley Road - good young sprinter in the Peter Moody stable, has had excuses in his last two at Caulfield, racing in slower ground. Was poor in his only run down the straight on Derby Day and was then spelled. At least a place chance.

9. Poland - nothing in his form to suggest he is any chance in this race.

10. Quantico - winner of six from ten including his last three since being gelded, but all in much weaker company. Stablemate of Lost And Running, trainer says there's not a huge amount between them. Still think it's a leap of faith to put him in the finish.

11. Roch'N'Horse - another Kiwi mare, closely matched with Levante on recent runs. Won a jumpout down the straight a week ago so should handle the unique course. Big price, there'll be more suitable races for her in Sydney later.

12. September Run - looked like she could be the new Black Caviar 18 months ago when she won the Coolmore but hasn't matched that performance in nine runs since. Sent off 2.80 fav here last year and flopped. Can't have her.

13. Snapdancer - speedy type who sticks mostly to running in mares' races. Nice wins in the Magic Millions mares' race and the Triscay Stakes last time but this is a big step up, even with the weight advantage.

14. Swats That - fast mare who always look like a 'gunna'. Had excuses in most of her spring runs, ran on well to finish second behind Nature Strip in the VRC Classic in the spring and finished a close-up fourth in the Lightning at WFA. Now meets Home Affairs 4.5kg better for 1.7L defeat over what should be a more suitable distance. But the big concern is her time between wins - 517 days. Ran fifth last year off similar weight, starting 7.5. Form her also includes a second behind September Run in the Coolmore (just her fourth start), third in the 2021 Lightning. Will flatter to deceive again, chuck her in for third and fourth in your exotics.

15. The Astrologist - ran OK in the Lightning last time at WFA, drops to the bottom of the weights and has a good record here, but this really is a free throw at the stumps. Finishing in the first half would be a good result.

16. Artorius - boom Blue Diamond-winning 2yo who hasn't quite kicked on, but still runs at a very high level. Walks out of the gates so will rely on a fast tempo and being able to get a clear run. Finished third behind Home Affairs in the Coolmore last spring, never really having a clear path but working home well. Gets a similar inside draw here so the concern is whether the field fans out or comes to the inside rail. If it's the latter, I think he's in strife but if they head towards the middle and he has a clear run, he has to be right in this with a 5kg weight swing on Home Affairs and a lethal finishing sprint. Jockey Craig Newitt has won this race three times.

17. Finance Tycoon - another 3yo at the bottonm of the weights. Finished fourth behind Artorius in last year's Blue Diamond. Has tracked a different path to the former, running in weak races but ran a quick time winning the G3 Zeditave last time out. Gun apprentice Josh Richards takes his first ride in a Group 1. Might be the only pace on the inside rail side.

A Group 1 handicap, never a simple puzzle to unravel. Home Affairs might be a superstar but carrying 56 in a proper G1 handicap has caught many gun 3yos short in the past. Lost And Running might just be damn good but he has had the perfect run in his last two starts. Under these conditions, drawn the middle and with hoof filler, I think he's a bit short.

I'm leaning towards a few run-on horses set up to pounce off a fast pace - Artorius, Count De Rupee and Masked Crusader. They're spread across the track, and without being able to watch the earlier races, I'll take Count De Rupee at the price (23.0) each-way.