It's the big day for the fillies on the weekend of the Platinum Jubilee. We won't see dear old Lizzy there this weekend, but no doubt there'll be thousands in the public section decked out in red, white and blue, while the toffs in the posh bit living off Daddy's money (and/or five generations before them) get to wear their ridiculous top hat and tails. Racing 'for the people' seems further away than ever at the moment.

Enough of the ranting, over to the Group 1 preview. I doubt we'll see a win like Snowfall ever again (16 lengths thank you very much), but nobody was expecting that last year either! 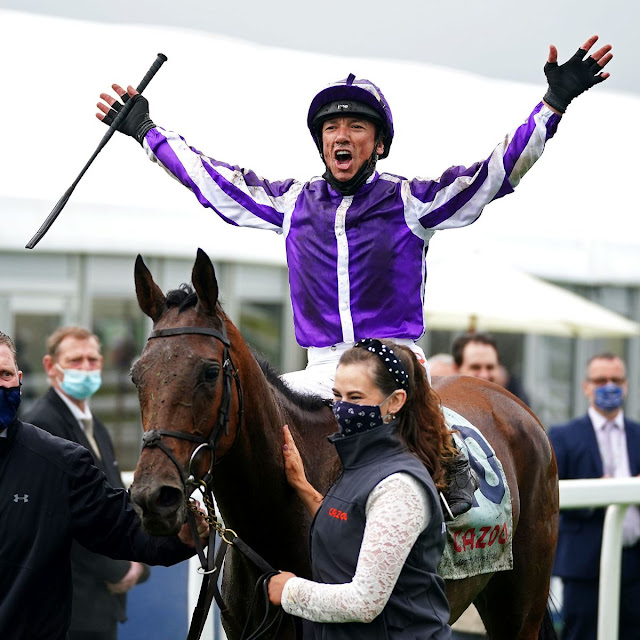 1. Concert Hall - by Dubawi out of 2012 Oaks winner Was. Won the Listed Salsabil Stakes at Naas over 1m2f before dropping back to the mile of the Irish 1000 Guineas, where she finished third, just behind Tuesday. She was stable third choice that day, which doesn't inspire a great deal of confidence though her mother wasn't the stable favourite won at 20/1. Also, Dubawi might be a super sire of horses over 1m-1m2f but his Derby and Oaks tally still stands at zero. Can the cross with a daughter of Galileo bust that trend? My price - 14/1

2. Emily Upjohn - Sea The Stars filly who looked a decent type winning on debut last November but has made huge progression this season, taking in a novice and a G3 by a combined 15L. The concern is the depth of the form behind her but she did thrash them and four rivals from the first win at Sandown have since won. Gosdens + Dettori + dominant wins. John Gosden rates her in the same class as Taghrooda who won impressively back in 2014. Entitled to be a clear favourite, can't see bookies willing to take her on too much. My price - 6/4

3. Kawida - Sir Percy filly owned by breeder Kirsten Rausing. Beaten a length at Saint-Cloud in the G3 Prix Cleopatre behind Place Du Carrousel, who then ran 1L second to Above The Curve in the G1 Prix Saint-Alary last weekend. Her run in Paris was first-up after six months, when she won the Listed Montrose Stakes over a mile, ahead of With The Moonlight, who is about 1/10th of her price today! By a Derby winner so no concerns about the trip, meanwhile her dam is a half-sister to multiple Australian G1 winner Zaaki. Has a bit to find on ratings but might run a decent race at big odds. My price - 30/1

4. Moon De Vega - winner of a fillies' maiden last season and resumed this year with an unlucky fourth in the Cheshire Oaks. In that race, she drew the plum rail draw then had to work to take up a position in midfield. At the top of the straight, she was blocked behind tiring runners and lost perhaps 3-4L. The front three were off and gone by the time she was clear, and she worked home nicely, but the damage had been done. In the mix for the placings despite being drawn widest of all. My price - 33/1

5. Nashwa - impressive filly who has won her two starts this year very easily, but probably went to the front way too soon both times. That should mean a more patient ride is on the cards from Hollie Doyle, otherwise she might just be a sitting duck as she stargazes when she hits the front. Doesn't quite have the boom of her favoured stablemate but that may just be because of the races she has come through. There's not a great deal between them on ratings and both are still quite unexposed. Trainer is a little concerned she might be too brilliant to stay the trip. My price - 5/1

6. Rogue Millennium - won the Lingfield Oaks Trial but that is traditionally the weakest of the Classic Trials. Worked home nicely on that occasion to claim victory on the line, but the form behind her is, in blunt terms, rubbish. Unbeaten in two starts so likely to be more to come. Distance doubt due to the Dubawi record in classics. Great to see a public syndicate mixing it with the blue-bloods but I can't see her in the finish. My price - 50/1

7. The Algarve - fourth-ranked of the AOB quartet, perhaps they'll change tactics and send her out as pacemaker. Got left for dead in the Musidora behind Emily Upjohn and despite being by a US Triple Crown winner out of an Oaks winner, none of her 11 half- or full-siblings to race have been able to stay 1m4f. Drawn 2, hopefully sticks to the rail and out of everyone else's way. No hope. My price - 400/1

8. Thoughts Of June - revelled in the soft going and the golden form of Ryan Moore at Chester, winning the Listed Cheshire Oaks. That was a big step forward in terms of ratings, could still be improvement left in her. Jockey bookings are interesting, seems to be third-string but that's not stopped Aidan O'Brien winning Classics with such types before.

9. Tranquil Lady - impressive winner of the G3 Blue Wind Stakes at Naas four weeks ago, running away from several fillies with notable Group entries. At her previous run on seasonal debut, she finished 4.25L behind Concert Hall who runs here. Whether she needed that run or preferred the cut she got at Naas is unclear. Half-sister to multiple 1m2f G1 winner State Of Rest, by a staying sire. Jockey Tom Marquand is in sterling form, riding a treble earlier in the week at Newbury. Should park behind the pace and look to pounce entering the straight. My price - 10/1

10. Tuesday - sister to Minding who won this race back in 2016 but never tried the trip again, while none of her other five sisters were much good at this distance. Surely it's a little weird that all seven foals have been fillies? Third behind Cachet at Newmarket and runner-up to Homeless Songs at the Curragh in the respective 1000 Guineas. Kept on well from a prominent position in both races, likely to be ridden more patiently here to see out the mile and a half. Ryan Moore's choice of the stable trio. Drawn the dreaded one slot which makes life just a little bit harder around this course. My price - 11/1

11. With The Moonlight - bolted up in the Pretty Polly at Newmarket on resuming but the form behind her is weak, highlighted by the runner-up being beaten at 4/9 in a maiden next time. Ran third behind Kawida as favourite in the Montrose at the end of last season. Step up in trip might have been the making of her but I still have reservations about her. Buick + Appleby factor squeezes her price too far IMO. My price - 14/1

The unique nature of Epsom means some horses will relish the test, others not so much. But we're purely guessing how those groups will be divided up before the race. The extreme inside and outside gates traditionally are at a disadvantage, but in a field of only 11, I'd suggest those trends are less influential than in a full field.

First eyes go to the Ballydoyle, Godolphin and Gosden runners, and it's the latter of that all-powerful triumvirate who holds the cards here. Gosden, or more correctly, the Gosdens now that it is a father & son training partnership, train the two favourites who should dominate the race. I don't have a lot of time for the Aidan O'Brien or Charlie Appleby runners, if they come to the fore then it will be a weak race (which happens from time to time in the Classics).

Emily Upjohn looks to be the prime candidate, she mightn't be beating much, but she has donkey-licked them and this is not a golden generation. But at what price do I want to back her? 11/10 I see now doesn't get me reaching for the wallet, but 6/4 as per my assessment would be tempting. Might just save the bet for a double into my Derby pick(s).

I'd love to see Nashwa win for Hollie Doyle, she should be right up there, and if you've read all the way through, you'll probably guess my longshot for the place is Kawida.