The Daytona 500 was rained off on Sunday, and again Monday afternoon local time, so the race was run on Monday night, which meant it started after midnight UK time. And it has just finished at 6am UKT. So combine that with being shown on a premium channel, Premier Sports, and it made it a pretty poor trading race this year unfortunately. Overall matched volume on Betfair way lower than any previous year. Still got a green book, but nothing like in previous years and not worth the effort really. Thankfully I got a few hours sleep in the middle, just happened to have the baby wake me up near the end of the race...

Matt Kenseth won the race, a crash with just a few laps to go usually sets up a great finish, but nobody was awake and Kenseth's teammate Greg Biffle (who was a much better result) was parked right behind him, protecting him from the chasing pack, hence no last-lap volatility and chaos. 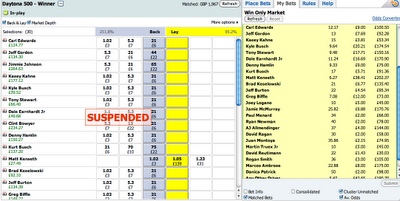 In previous years, it has been bloody marvellous -

Ah well, c'est la vie. Back in the zone on trading long-running markets with many selections, with this and the Next Wolves Manager market - which unfortunately I have to wait two months for it to settle.