The Blue Diamond Stakes - the first Group 1 of the season for the juveniles, a strong field and a contest made all the more intriguing by the barrier draw. As you'll see from the historical analysis provided earlier in the week, the last three favourites have won but five of the previous six winners started double-figure odds (in the decimal format).

A G1 race calls for G1 analysis, so I've drafted in Racetrack Ralphy for his comprehensive assessment of the big race. Visit his site for regular expertise or follow him @rtralphy for form discussion and not-always-serious commentary about the Australian racing industry. 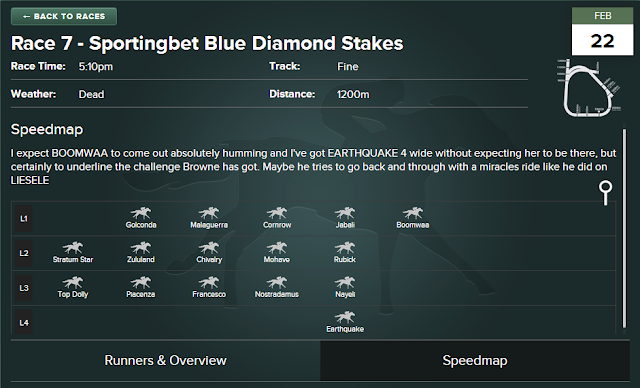 1 Boomwaa Noel Callow • Robbie Laing (13) 57kg
Has race experience, tactical speed and a 1200 run advantage over the opposition and that could take him a long way. Couldn't sustain a mid-race surge last week against the elite older Group 1 sprinters, and he could run a very bold race from the front at monster odds.

2 Rubick Brenton Avdulla • Gerald Ryan (10) 57kg
$2:35 Freak galloper who had no right to kick away from the murderous early pressure in the Blue Diamond Prelude where all the other leaders collapsed. Did that run bring him on or gut him? If it's the former, then this could be a space job, and if it's the latter will he be flat or fall off the cliff? Only time will tell, but I'm a believer that he is going to win this.

3 Mohave Chris Symons • Peter Snowden (6) 57kg
Was part of the RUBICK pressure last start and unsurprisingly couldn't cope. Is drawn to get the gun run and will probably look to get some cover early, he previous win in ok time though suggested he is in the second tier and I'll risk.

4 Chivalry Stephen Baster • Mark Kavanagh (5) 57kg
$17:00 Was a hard-closing third behind RUBICK or was the reality just one of the least tired after everything was spent early? Either way his run was sound and if the blinkers and a likely good run from the barrier improve him, he's a wider chance.

5 Nostradamus Glen Boss • Michael, Wayne & John (11) 57kg
$10:00 Could be the one set to explode. Proven multiple Grand Final winning trainer and jockey and has clearly been set specifically for this. Couldn't get going early behind RUBICK after they appeared to concede from the barrier, before a monster mid-race surge of speed which told late. Is drawn next to RUBICK and possibly ends up right behind him with EARTHQUAKE wide and/or back. Second pick.

6 Jabali Damien Oliver • Mick Price (3) 57kg
Showed good speed from the right position first up behind RUBICK before running second. Was that his best or can he spring off that? The former probably won't see first half finish, while the latter sees him a strong place chance.

9 Francesco Vlad Duric • Gai Waterhouse (8) 57kg
Very strong debut when losing 2nd on protest at Rosehill, but then didn't really progress in the Prelude behind RUBICK. The lack of market support was interesting. Was he disappointing or in need of the run prior to his Grand Final?

10 Malaguerra Brad Rawiller • Wez Hunter (1) 57kg
Very fast country horse who found a new level of speed behind RUBICK and wasn't up to it. Happy to risk.

11 Stratum Star Craig Newitt • Rick Hore-Lacy (12) 57kg
The least credentialed runner in the field but not the least talented. Was respected in the market without public information behind NOSTRADAMUS on debut, but got his tongue over the bit. Right back to last from wide behind RUBICK and while entitled to close as the leaders tired to. Further improvement could see a cheeky run.

12 Earthquake Damian Browne • Peter Snowden (15) 55kg
$4:25 Boom filly who LOOKED more impressive than RUBICK and ran the same time, but from there it's open to interpretation as to the respective merits of the wins. The facts are that she spread her speed throughout and didn't have to go very fast early. Can she if needed? The next layer of challenge is the wide barrier, which looks a tough ask on paper. The big positive away from her talent though is what brilliant Grand Final trainers the Snowdens are.

13 Nayeli James McDonald • Gai Waterhouse (9) 55kg
$17:00 Showed a terrific turn of foot when asked here three weeks ago off a moderate mid race position. Will she be as strong with better horses sharing or dominating the speed at the end of 1200?

14 Golconda Dean Yendall • Robbie Laing (2) 55kg
Should give the owners a terrific thrill pre-race among the excitement of competing in Victoria's preeminent Group 1 race. When the barriers open? She may beat a couple home.

15 Top Dolly Craig Williams • Tom Hughes (17) 55kg
Was quite brilliant on debut when a hard-closing 2nd to one of the best early season 2yo's OAKLEIGH GIRL. Resumed just $11 behind EARTHQUAKE but was wide and pulled up sore. Williams has stuck, so the excuses may be legitimate, but is she good enough?

16 Piacenza Michael Rodd • Tony McEvoy (14) 55kg
Was an ok run here behind EARTHQUAKE after being beaten in a very fast Adelaide race. Maybe she was flattened by the run? Blinkers go on, gun Grand Final trainer and star jockey riding at his minimum suggest she can improve off that, but of course needs to.

Race Overview
(For a full race by race professional analysis of every runner and every run they've ever had, check Vince Accardi's Blue Diamond blog elsewhere on the website or App under the futures section. Note should you purchase it, you'll get the Golden Slipper free.)

Are you a RUBICK believer or not? For a yes/no answer $3:00 seems good value. Those odds say he would be beaten 2 out of every 3 times these went around I can't subscribe to that.

Staking note - Ralph's standard spend per race in 20 units, often spread across more than one runner. 30 units represents high confidence and a larger than normal outlay.