So checking out the rest of the card... 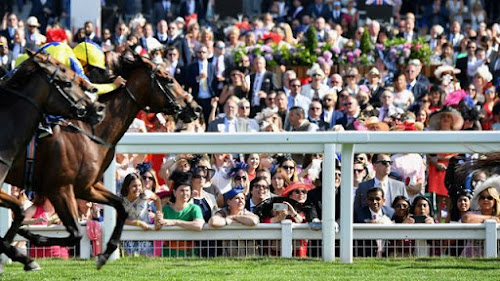 Royal Hunt Cup Consolation
So just in case solving the Royal Hunt Cup wasn't hard enough, they've brought in a consolation race under the same conditions!
Brian Epstein was high in the betting for the Buckingham Palace but didn't get in. Was set for the Britannia last season but then nearly died last season after a mystery bug. Stable have a high opinion of him and familiarity is probably the only reason Moore and Dobbs have kept their respective Hannon rides. Will be better for his second at Haydock after a year off. Red Bond ran third behind Daarik at Newcastle and will relish the extra furlong, while Maydanny is another Hamdan al Maktoum unexposed handicapper with plenty of upside.
Hampton Court
Some very interesting formlines converge here, not to mention pedigrees. The blueblood of the field is Russian Emperor, by Galileo out of outstanding Australian mare Atlantic Jewel, who won a swag of G1s. He still looks immature, yet to put it altogether on the track. The extra distance might help but I'm concerned this comes too soon after his last run to take that next step. Berlin Tango had his form franked yesterday with the win of Pyledriver, while Juan Elcano ran a nice fifth in the Guineas. Small field but wide open, only ruling out the 5 & 7.
King George V
A big spread of weights in this 3yo handicap, where contrary to natural assumptions, wide draws are favoured for some reason. I was very impressed with To Nathaniel last week at Kempton, not much went right for him in the run and he still kept fighting in the straight to win. Expecting a stronger tempo in this large field to suit. Hukum is highly regarded in the Burrows camp and came from a mile back to win his most recent start at Kempton. He doesn't have the draw on his side here but he does have the benefit of Jim Crowley who rode a treble on day one.  Oleksander for Archie Watson appeals at a big price, he wasn't far behind Kipps at Haydock after uncharacteristically leading, and at 10x the price of Kipps, I'm prepared to chuck him in for the value in a very tough race.
Prince of Wales
After the flop of his full brother Mogul on Tuesday, I'm prepared to take on Japan here. He might be the best of the family but the rest of them haven't trained on too well after starring early in their careers, and despite being the best performed of the lot, there's a danger he has now peaked. And there's a swag of horses who could upset him - Bangkok is the only one you can really rule out. Lord North is a highly progressive 4yo trained by John Gosden, rapidly rising through handicap ranks winning the Cambridgeshire last September, and resuming with a win over the smart Elarqam at Haydock in the relocated Brigadier Gerard, where he appeared to daydream a bit once he hit the front. Barney Roy was flying in Dubai early in the year, while Headman still appears to have more to come.
Royal Hunt Cup
How big is your dartboard? 23 runners, all with some sort of hope at their best. The horse I found first was Beatboxer, having first run being gelded over the off-season. The son of Scat Daddy has always shown plenty of talent, perhaps the snip improves his focus. But I can't be backing him, or any Godolphin horse this week. Note the recent change of ownership, from Princess Haya to Sheik Mohammed. 1.01 shot that wasn't by mutual agreement, and it's pathetic that racing around the world sweeps this under the carpet because Godolphin has such a huge footprint in racing. All hail Chris Cook of the Guardian for being prepared to write about it.
Using the angle of speed figures, it spits out the talented but as yet disappointing Willie John. Dropping into his first handicap, he should be suited by the high speed, parking out the back and cruising through to make his run entering the final two furlongs. Whether he is good enough is another story. Note that when he flopped in the Wolferton last year, his performance was blamed on soft ground, so keep an eye on the forecast.
All in all, will be going wide in the Placepot/Colossus P6. Watch out for one down the bottom called Walhaan. Purchased out of the Rouget yard in France, he won't have run in over a year and they've come up with a handicap rating which must have a large margin of error. Will be a massive price to compensate for the guesswork but Ian Williams is a canny trainer.
Windsor Castle
Covered in detail here.
Copper Horse
A new race named after a statue, at least there's no danger of this one being cut down! As this trip is rarely used, we're guessing at any draw advantage but being so close to the first bend, we can take a stab that being caught wide isn't great.
Ian Williams has another British debutant, this time called Ernesto and bought out of Germany. He looks destined to go jumping, but did run close up in the German St Leger last year to Ispolini (who was a leading chance for the Melbourne Cup before injury), and beat Alounak (now trained by Andrew Balding, ran well in the Woodbine International and Breeders Cup last season) early in the 2019 season. This is where a paddock watch would come in very handy.
Two horses who connections have publicly stated they are aiming at the Ebor, and thus need to increase their handicap mark, are Collide and Alright Sunshine. The former is a brother to Logician and should relish the trip, while the latter is seven from 12 starts and ran fifth in the G3 Sagaro. A drop back to a handicap will suit.