Friday's summary page had a great result with the best outsider Alounak running second at 40/1 SP, with as much as 80/1 available earlier. Onward and upwards, it's the final day! 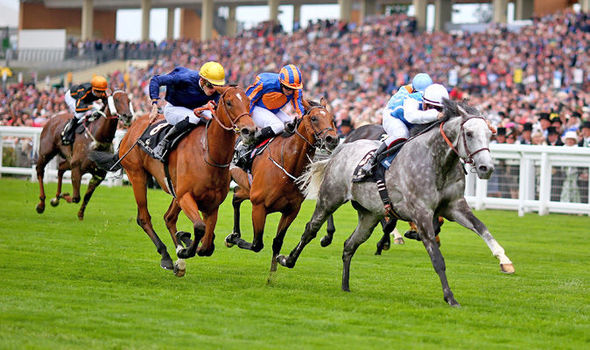 Silver Wokingham
Another nightmare consolation handicap to start the card, and unless you go 15 wide, you're probably odds-on be out of your Placepot/Colossus ticket after one race. With only 3lbs between top and bottom, this is very evenly graded but I'm going to take a punt on the bottomweight Gabrial The Wire (50/1).  He resumed on Jun 2nd running third in a handy Newcastle handicap, his first run on the AW where he was caught behind a wall of horses when the winner made his run. Once clear he made decent ground and will be better for the run. Despite having most of his runs at Dr Koukash's playground, Chester, he has won up the Doncaster straight and wasn't far away in a big Newmarket handicap last July. With Connor Murtagh getting 3lbs and drawn toward the middle of the track, I think he'll give a great sight at 33/1.
Toward the stand side, Embour (16/1) looks a chance with Thore Hammer Hansen aboard who rode his first Royal Ascot winner on Tuesday. A winner of more than a quarter of his starts, he was a close up fourth at Doncaster last weekend, only missing the frame when Ryan Moore dropped his hands. Late last season he was flying in big handicaps finishing close behind Oxted in the Portland and Angel Alexander in the Ayr Gold Cup, after a fourth in a heritage handicap here in July. The 5lb claim might be enough to change his fortune.
Queen Mary
More Beautiful (6/4) was very impressive on debut, spreadeagling the field at Naas. By War Front out of Maybe, she is an absolute blueblood and stands out as the one to beat. Behind her, there are many chances for the minors. Grammata (33/1) ran on well at her first outing and will be better for the experience, with Oisin Murphy taking the ride a big plus. Mamba Wamba (33/1) rattled home at Newcastle once she figured out what was going on and will be a big price, and Sacred looked to have plenty in hand when scoring at Newmarket. She travelled sweetly and had to change course twice before shooting clear that day. Beware Campanelle who is supposed to have been one of the best from Wesley Ward's troupe this year.
Coventry
A mighty tricky juvenile race to decipher with no less than nine debut winners out of 15 runners. Mark Johnston has three of them: Qaader, in the Hamdan al Maktoum colours, to be ridden by the flying Jim Crowley; Army of India, a Sepoy colt who did plenty wrong at Kempton yet still won; and Thunder of Niagara, a Night of Thunder colt who scored at Newcastle. At the price, I'll have a stab at Army of India (25/1) and hope he settles better with a faster pace in a big field. He showed proper determination to hold off Science on debut, and having James Doyle aboard can only be a good thing. Qaader (4/1) and the Tom Dascombe-trained Lauder (10/1) for the placings.
Coronation
Perhaps disappointing to have just seven line up her but such is the quality, the two outsiders of the field are very good Coolmore fillies. It is a classy field. The American filly Sharing (13/2) won the Breeders' Cup Juvenile Fillies last year over Albigna and Daahyeh - at better than a 'random straw' price (seven equal runners = 6/1), she's worth a look. Similarly Cloak of Spirits (8/1) ran second in the 1000 Guineas and Richard Hannon reckons we haven't seen the best of her.
St James's Palace
Similar to the previous race, a small but select field. Wichita beat Pinatubo in the Guineas, Palace Pier has come along as a genuine star outside of Group class, Positive beat Guineas winner Kameko back in August as did Royal Dornoch in September, Arizona won the Coventry over Threat.. you can make a case for all of them. Was the Guineas a gutbuster or will those who ran be fitter for it? The volcanic colt Pinatubo returning to the winners' list would be a boon for the sport but I'll take a punt on Threat (11/1) who chose to miss the Guineas.
Diamond Jubilee
Covered in detail here.
Wokingham
Weirdly, the proper version of the Wokingham seems less interesting than the consolation. Backing up from the Buckingham Palace on Tuesday is Jack's Point (20/1). He belied odds of 66/1 to run second in that race and backs up quickly without penalty. He is flying at present and the drop back to 6f shouldn't be a concern at the breakneck pace. Gate 1 is a potential concern, but if he pings the gates like on Tuesday, he'll have no trouble drifting into the middle if desired. Beware the Uruguayan filly Bella Fever (33/1) running for Jane Chapple-Hyam. After starring at Maronas, she was sent to Mike de Kock in Dubai and won the UAE Guineas Trial over Final Song (who ran fourth behind Love in the Newmarket equivalent), before being caught five wide in the Saudi Derby over a mile, a trip probably beyond her. She is seriously quick and can lead or sit off the pace. Will be a big price too.
Queen Alexandra
The Grand Visir (11/4) won the Ascot Stakes over a similar distance last year and then went onto contest the Ebor, which is a significantly better class than most of these. Nate The Great (6/1) is on the rise and can fight out the finish.
Best of the day - More Beautiful and best outsider Gabrial The Wire.