A classy Listed race late on day one to mix up proceedings. Entries in this are usually not quite top drawer, with quite a few of them ending up on a plane to Australia to chase the riches in Melbourne. That might change this year with new health requirements coming in for new arrivals.

As opposed to my other feature preview, the St James' Palace Stakes, this race tends to be more open according to the trends. 11 of last 15 winners have started 7/1 or over, and 13 of the last 18 winners were unplaced last time out (only three qualify). 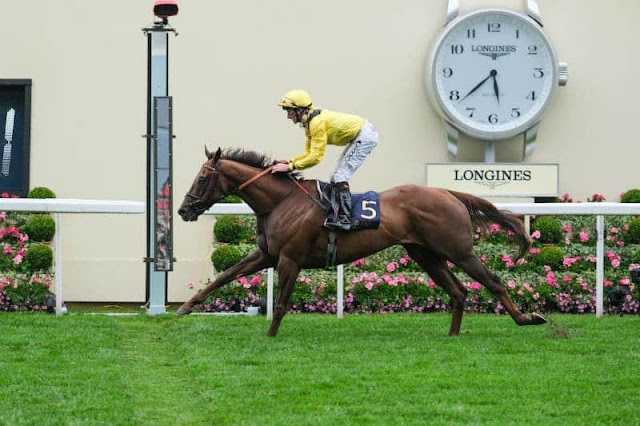 Addeybb winning the Wolferton Stakes in 2019.

1. Euchen Glen (10). Pulled off a 20/1 shock in a field of four by winning the Brigadier Gerard by 4.25L three weeks ago, after dropping back from 1m5f. Likely to be a tougher task here in a bigger field but he will be the highest rated horse here for a reason.

3. Volcanic Sky (14). Godolphin runner attempting the shortest trip of his 20-start career. Carrying a penalty for a weak G3 win at Meydan in February, he looks up against it here. Cheekpieces added for the first time.

4. Solid Stone (4). Impressive Listed race winner at Windsor last time when Ryan Moore elected to go solo down the near rail rather than go wide searching for better ground, and ended up winning by 2.5L. He pushed for favouritism on that occasion and the time was good, so I'm inclined think it was more than just better ground. More impressively, the form before and after that race is red hot. Of the five runners chasing him home, three were last start winners, while the other pair had been runners-up. Four of them have run since, with three winners and one third (behind one of those runners). Two starts here, beaten around 2L each time, most recently second in the Balmoral Handicap on Champions Day, behind Njord. Will be popular.

5. Stormy Antarctic (6). Veteran who seems to have been rejuvenated by a wind op in the off-season. After only one placing from eight starts between June 2019 and March 2021, he has since run 2-2-1 in similar Listed company. He finished behind Solid Stone at Windsor, perhaps due to the route taken but more likely on merit. In the mix.

6. Blue Cup (2). Backs up quickly after a dominant win in the Friday mud at Epsom when he finally had some luck. His get-back racing style always makes like tricky for backers, but the wide open spaces of Ascot should give them some relief. Won't have a problem with a firmer surface, solid chance.

7. Dawaam (7). Resumed after wind and gelding surgery with a soft win at Chelmsford, his fourth win from five starts on the all-weather. His turf record stands at 0/2 but his run last year at Goodwood was decent enough to suggest he has no issue with it. Expect further improvement from him after double surgery and just the seven starts. Kitten's Joy progeny have a solid record at their second race after gelding (>20% win) and Jim Crowley's record at Royal Ascot is impeccable. Cheekpieces added for the first time.

8. Father of Jazz (12). A star of the winter all-weather circuit, stringing together impressive wins at Wolverhampton, Chelmsford and Lingfield (all at odds-on) before running third in the Winter Derby behind Forest of Dean and Felix. Shows plenty of talent but appears to need a genuinely-run race, with his last two defeats put down to being caught flat-footed or too far back in a sprint home. Has been gelded since his last run, connections hoping it improves his focus.

9. Felix (8). Upheld his Winter Derby form (second) with a third place in the Dubai Turf in March, earning connections almost £300k and more than quadrupling his career prizemoney, despite being the equal lowest-rated horse in the field. While he hasn't run on turf in Europe for almost two years, don't let that put you off. The Meydan run was a career best ahead of a few horses who would be more than competitive here. Won't have the hype of a Gosden or Stoute runner, but will be right up there.

10. Fox Tal (9). King Power-owned runner who ran sixth in this race last year, running a career-best RPR of 117, but was beaten 6.5L behind the ill-fated Mountain Angel. He started at 100/30, with only the future Cox Plate winner Sir Dragonet higher in the market. He raced too keenly on that occasion, a trait which followed him all summer and resulted in a gelding operation at the end of the campaign. Yet based on his two runs this year, it hasn't resolved the problem. Highly talented but a risk if he won't settle. Once his price gets out to double figures, then you can start accepting that risk.

11. Juan Elcano (5). Recently-gelded son of Frankel who promised plenty as a 2yo but hasn't taken the next step. He beat future G1 winner Subjectivist on debut followed by a pair of G2 seconds as a 2yo, ran fifth in the 2000 Guineas but has levelled out since. The snip at the end of his 3yo campaign didn't reap instant rewards, finishing midfield in the season opening Spring Mile at Doncaster however this trip is more likely his game these days. Might need a softer target to get his confidence back, but has had a wind op since his last run.

12. Palavecino (11). Runner-up in the AW Middle Distance Championship, just over a length to the better of Forest Of Dean and a further two back to Sky Defender. Then returned to the grass at Chester, running third in the G2 Huxley Stakes, a length behind Sangarius. Has been close behind in most of his last six starts (all Pattern races), since reaching an official rating of 100, but hasn't won, suggesting he's in that awkward situation of not quite good enough for Pattern races but without many handicap options being so highly rated. Can't see that situation improving here.

13. Patrick Sarsfeld (3). Talented Irish raider who was a leading chance for the big races in Melbourne late last year but elected to stay home after a busy campaign which started with three wins racing through the classes, and concluded with a second in deep conditions in the G2 Prix Dollar at Longchamp. After eight months off, he was beaten a head by a rival he conceded 16lbs to, so he looks ready to hit top form - though it's slightly concerning the trainer hasn't mentioned him at all in pre-Festival media stable tours.

14. Victory Chime (13). Hasn't finished out of the top four in his last 11 starts, most recently second at Epsom behind Blue Cup, giving the facile winner 10lbs. The start before that, he beat Sky Defender at the same venue with a 6lb advantage. Has an enviable strike rate of nine wins from 24 starts and has achieved career-best RPRs at his most recent two starts. Very honest, might be a silly price.

Tricky race this with only a couple I believe you can rule a line through. Not much between my top pair, could back both depending on prices on the day, with Victory Chime worth an EW play with extra places.

Felix - back at 7/1+
Solid Stone
Victory Chime - back EW at 33/1 with extra places.
Patrick Sarsfeld